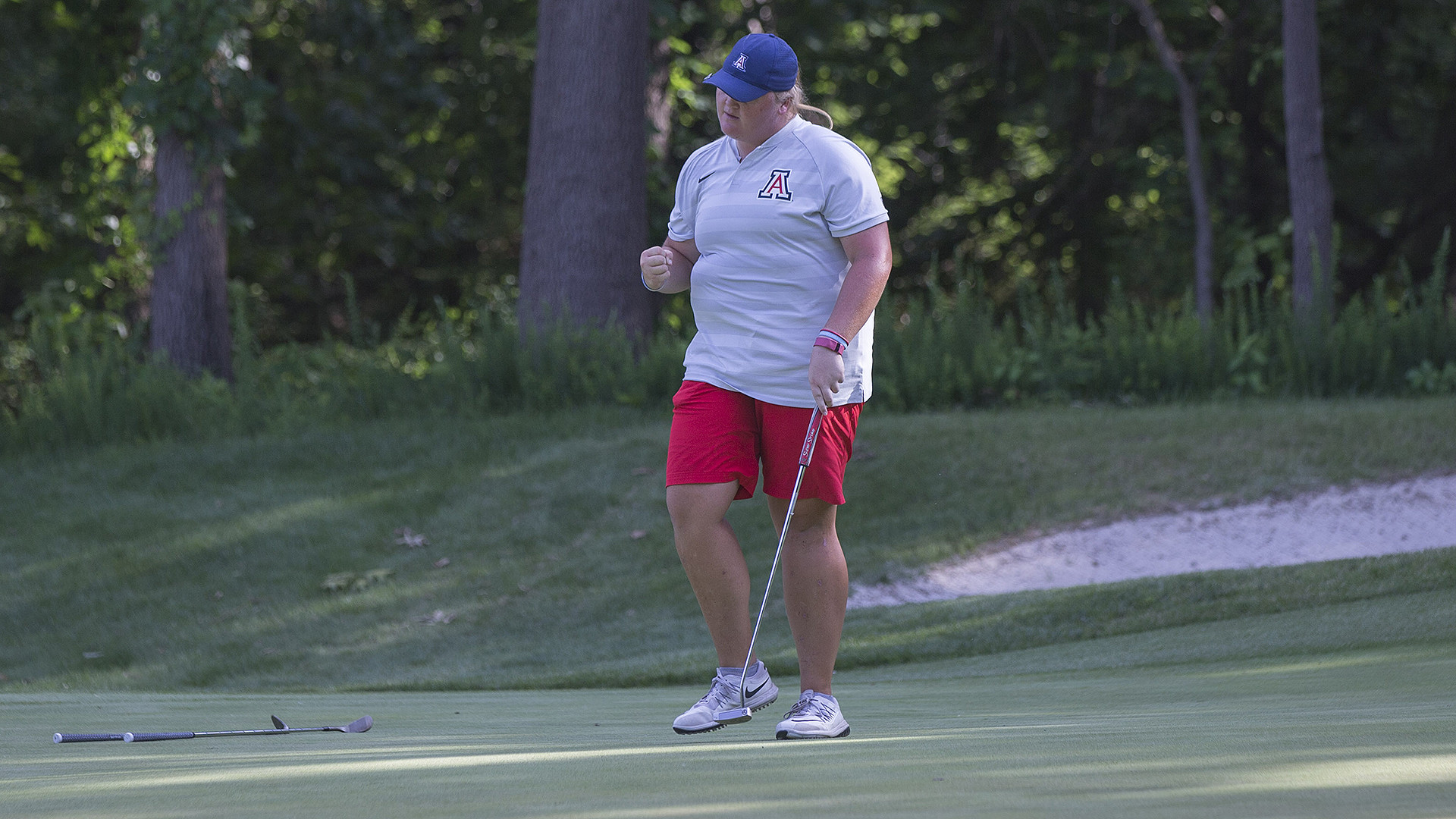 STILLWATER, Okla. – Before Karsten Creek is officially handed over to the men, here are some parting thoughts from the NCAA Women’s Championship, which saw Arizona defeat Alabama in an extra-holes thriller:

• A team of destiny, maybe not, but there was an unmistakable sense from speaking to other coaches that they wanted no part of Arizona after Bianca Pagdanganan buried that 30-footer for eagle on the final hole of stroke play. The Wildcats played with an edge, and without fear, after barely sneaking into the match-play field – and that’s a dangerous combination for opposing teams.

• It was heartwarming to watch Arizona’s Haley Moore sink the clinching putt, a 4-footer for birdie that gave the Wildcats their third NCAA title (and first since 2000). She’s had an interesting career, from making the cut at the ANA Inspiration at 16 years old to dealing with some less-than-welcoming teammates in Tucson. Her coaches refer to her as a “gentle giant,” but her wild swings in emotion on the course are difficult to manage; she so desperately wants to play well for her team that she puts undue pressure on herself to perform. That’s why Wednesday’s result was so important. “It gives them a little extra belief in themselves that they didn’t have before,” Arizona coach Laura Ianello said.

• That Alabama’s Lakareber Abe even pushed the anchor match into extras was somewhat of a surprise. She missed a 5-footer on 16 that would have given her a 1-up lead with two holes to play, and she also hit a pair of shanks (or semi-shanks) on both Nos. 13 and 17 that would have destroyed most players’ confidence. Instead, she stepped up on the par-5 18th and hit the second-most impressive shot of the championship, a roasted 3-wood to 12 feet to set up a two-putt birdie and sudden-death playoff.

• The pace of play at the NCAA Championship was, in a word, dreadful. Yes, the final day of stroke-play qualifying is the most intense day of the season, and it’s staged on the most difficult course they’ll play all year. But rounds can’t take six hours to complete, nor should the championship match go for 4 hours and 45 minutes in regulation. (They had time for maybe two more playoff holes before sunset.) In most cases, there was way too much over-coaching, and it’s something that needs to be addressed by the NCAA.

• The curse of the medalist continues. UCLA extended a run of misery for the top seeds after stroke play, as the Bruins made it 0-for-13 for both the men and women. If there’s any team that can snap the streak, winning both the stroke- and match-play portions, it’s Oklahoma State. The Cowboys are the prohibitive favorites at nationals this week, and not just because they’re playing on their home turf. Don’t be surprised if they take the stroke-play portion by as many as 20 strokes, which will only ratchet up the pressure in match play.

• In one of the tightest races in recent memory, your trusty correspondent voted for Wake Forest junior Jennifer Kupcho for the Annika Award, given to the top player in the country. Kupcho didn’t have the most wins – that was Arkansas’ Maria Fassi, with six. She didn’t have the most consistency, either – that was UCLA’s Lilia Vu, who didn’t finish outside the top 6 in the regular season. But Kupcho earned my vote for one simple reason: No player went into this season with the specter of having blown an NCAA title a year ago. In 2017, Kupcho had a two-shot lead heading into the 71st hole and made triple bogey to lose by one. All she did this year was rip off three wins in her last four starts – including regionals, where she set a school scoring record and sank the clinching birdie to push Wake into nationals, and then went wire-to-wire at Karsten Creek.

• Depending on your rooting interests, Arizona either won a thriller … or top-ranked ’Bama lost it in gut-wrenching fashion. The 18th green afterward is always a surreal scene: One team chanting and dancing and crying, while a few feet away the other five players are absolutely devastated. The trophy presentations are difficult to watch, with the five losing players and two coaches enduring a 20-minute ceremony. While Arizona whooped it up beside them, the Tide stood silently, holding their NCAA runner-up trophies, politely clapping and generally looking as though they’d rather be anywhere in the world but there.

• UCLA’s Patty Tavatanakit and Arizona’s Pagnanganan were the two most impressive players this observer watched last week in Oklahoma. The sound coming off their clubfaces was just different. They look like not just future LPGA winners, but possibly major champions.

• Alabama junior Cheyenne Knight is turning pro, and it’s a bit of a head-scratcher. Sure, she was a first-team All-American once again, but she also was the third-best player on her squad this season (and it wasn’t particularly close). It leaves a hole in the middle of coach Mic Potter’s lineup, and the void could grow even wider with standout Lauren Stephenson (fresh off recording the lowest single-season scoring average in NCAA Division I history, 69.5) expected to enter the LPGA’s new qualifying series in the fall. It could be the Kristen Gillman Show in 2018-19, and she’s ready.

• Duke senior Leona Maguire capped her remarkable college career with a quarterfinal exit in match play. She leaves as one of the best players not just in Duke history but in all of college golf, a two-time Player of the Year and the owner (at least for now) of the lowest scoring average in NCAA history. The only thing she didn’t do? Win a NCAA title, either with her team or as an individual, despite staying in school all four years. She’ll be an intriguing player to watch at the pro level, because Duke coach Dan Brooks believes she can be a future Hall of Famer.

• If you’re still griping that match play doesn’t crown the best team all season … well … just stop. The nonstop drama of Arizona-Alabama is exactly why the NCAA switched to head-to-head match play. It’s not going anywhere. 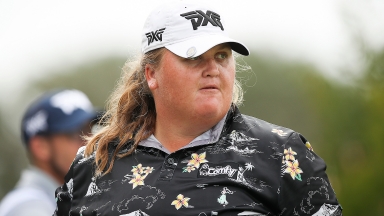 Moore finding her footing and comfort as a pro

Three years removed from her national championship moment, Haley Moore is still navigating her way as a professional. 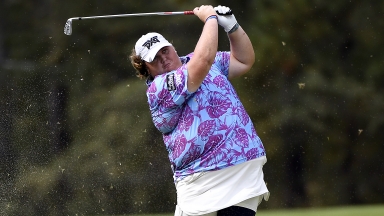 Backed by an upstart company, Haley Moore, whose story continues to resonate, has to only worry about her golf right now. 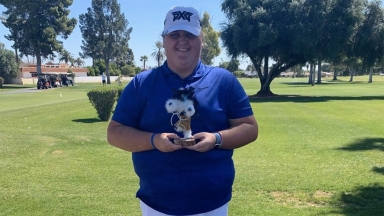 LPGA rookie Haley Moore shares a first-person account of what it's like being bullied and how she's fought for success.