Carnoustie '99: Choice of a lifetime for Jean Van de Velde 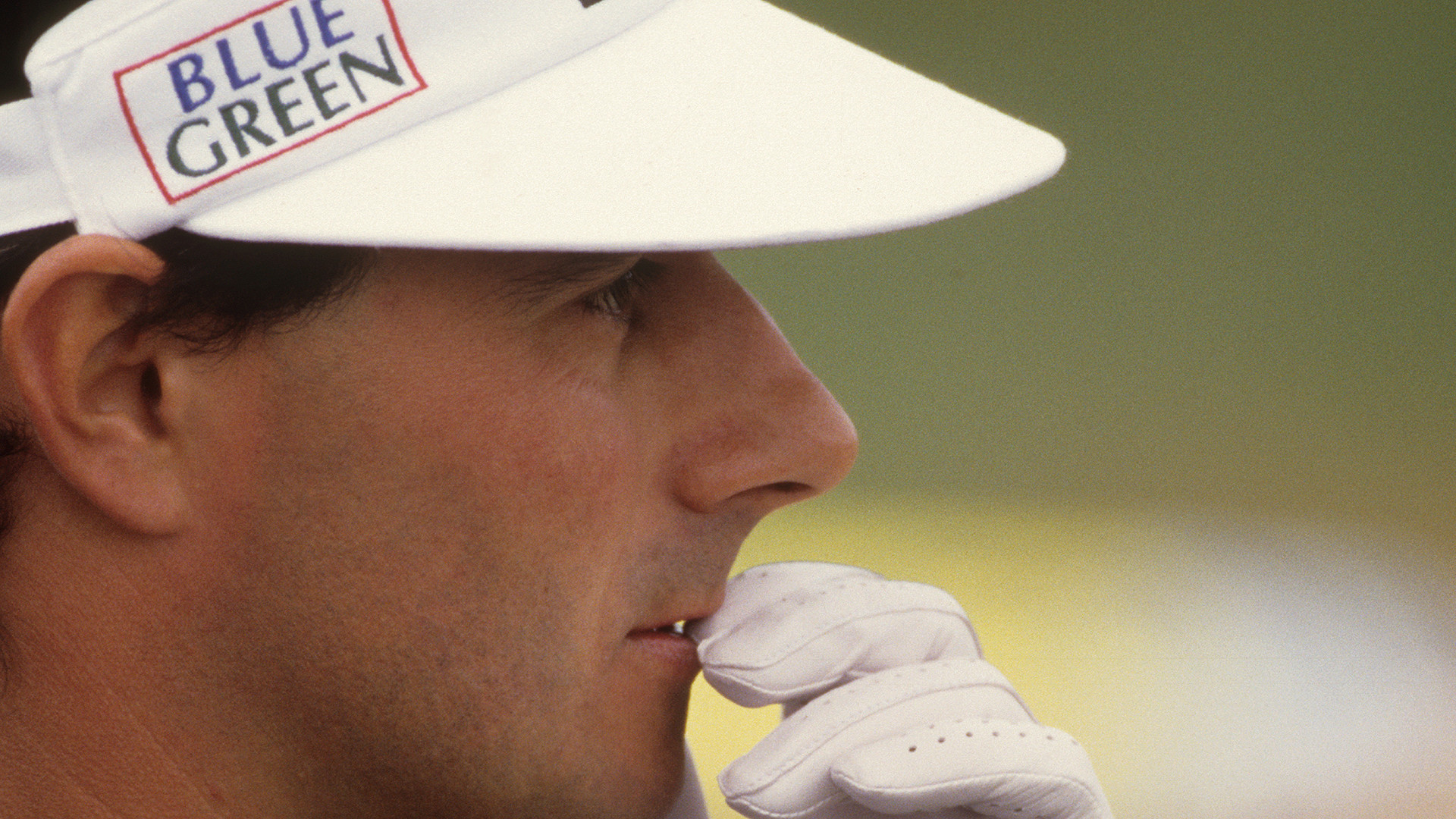 Oh, that way madness lies. Let me shun that. No more of that.

Forget about the hundreds behind you, purposefully packed and bundled, closer to you than should be allowed, their hands on your back and their screams in your ears. Forget about the thousands watching in semi-circle ahead, eyes aghast, anticipating what’s next. Forget about the millions watching abroad, bewildered and attuned.

And forget about the landscape presented before you. Madness lies ahead. Go left.

“Sorry I’m late,” he says, walking into a pub that won’t open for another one hour and 43 minutes.

It’s 9:17 a.m., only a few insignificant ticks past his scheduled arrival.

He looks good, dressed in a light-brown linen jacket; button-down dress shirt; jeans and brown suede loafers. He sounds good and why shouldn’t he feel good, too? He’s an Open champion.

The hair is a little thinner on top and stubble mostly gray on his face, but there’s no mistaking this character. Those English words in that French accent, in that comforting tone. When he talks to you, he does so in a convivial manner, looking you in your eyes, smiling, shaking your hand and introducing himself, without a hint of hubris.

A slight showcase of vanity would be acceptable, however.

The man is a major champion. A Ryder Cup hero who put a dagger into the heart of an American comeback in Brookline. A consistent European Tour player, and occasional winner.

How many times has he done this? Recounted the worst two hours and two minutes of his professional career.

Will there be anger? Apathy?

“So,” he says, comfortably seated across from a strange man with a familiar list of questions, “off we go.”

It will, in fact, never not be a big story.

You don’t forget what happened on July 18, 1999. At least not what happened between the hours of 1:30 p.m. ET, when he stepped to the 18th tee with a three-shot lead, and 3:32 p.m., when he congratulated another man. Certainly, Van de Velde never will. Every encounter with every witness assures that.

“I think there were around 250 million people [watching] on TV that day,” he says. “How long is it going to take for me to meet them all?

“Once I meet them all … maybe one day that’s going to pass by.”

Odds are you saw that day or have since seen what transpired, so you don’t need a detailed recap. But think about the lack of serendipity that occurred.

His tee shot avoids a burn that winds through the 18th hole at Carnoustie like a Grand Prix raceway. But what if it goes in? One in, two out, three layup, four on, two putts for six and the win.

His second shot hits a 2-inch metal bar in the grandstands and bounds backwards – arguably the most unlucky result in golf history. What if it goes into the crowd? Free drop; three, maybe four on; two putts for the win.

Upon ricochet, his ball hits the top of the burn’s wall and caroms into impossibly thick heather. What if the ball just went into the creek? The tide hadn’t yet risen. He could have played his third back into the fairway like a bunker shot. Four on, two putts for the win. Even if he takes a drop from the burn it’s possibly: three drop, four on, two putts for the win.

But none of these ‘What ifs’ occur. And for all of the fault due fate and misfortune, ultimately it is the man who is to blame.

Didn’t have to proceed forward with his third. You could have gone left, Jean Van de Velde.

Thank goodness he went left. Can you imagine? A three-shot lead on the final hole of a major championship, and losing? How could you go on with life?

Dramatic, but not overly so.

Fortunately, Jean doesn’t have to think about such things. He can sit down and answer these redundant questions with an honest smile on his face. He can relive his greatest professional moment and say, “I’m French. There had to be a little flair.”

And all because of what? Because he made the simple decision. Because he paused, and breathed, and composed. And his caddie was right by his side: Faire la bonne chose.

Because he went left.

And now here he is, a few minutes late, yes, but describing those final few moments, as well as the wonderful years thereafter. Talking about, not just his career, but about his family: his second wife, Jessica; his four children. His years living in Europe and Hong Kong. How he helped France land this year’s Ryder Cup. How he’s an ambassador for UNICEF.

If only the bar was open and everyone could share a glass of wine. He would choose, of course. For he knows well. What tastes best accompanied with fond recollections?

Oh, this could have been you, Jean Van de Velde.

The walk was a witness to how close Chaos can get to the edge without tumbling over.

A handful of well-meaning humans wearing red security outfits, frantically and futilely using their arms as a procession shield. Their only success being the humanity of those they sought to restrain.

Our protagonist – not yet a tragedian – walking briskly to avoid the crush.

And then he arrives at the spot.

This is where his ball now lies, after striking what should be an insignificant piece of railing, after bouncing off an equally irrelevant rock, and after taking one more hop on the deadened ground.

“The lie is horrific.”

He looks forward and sees the burn snaking back in front of him, guarding the green. How far is it?

Sixty-three yards to the hole.

Then, for a moment, he steps to his left, outside of the camera’s view. Two choices exist. Go forward or go to the left. Play straight for the green or play sideways for the fairway.

You only lie two, Jean. You only need a six. But where is your head? This moment. These people. The magnitude of it all. There is no clarity to consider those cautionary words: that way madness lies.

This decision is yours, Jean Van de Velde.

We know which door he chose. The tiger, not the lady.

Jean Van de Velde is not an Open champion. He is not a Ryder Cup hero. He has but one win since July of ’99.

“Now, playing sideways, which I thought about, I didn’t have a guarantee to be on the fairway. That’s why I didn’t play sideways, but that was not the point. The point was not to have a bad lie for the fourth one. And by going sideways, I would have had a good enough lie to hit it [on the green with a fourth shot].

“If I’m on the fairway, game is over. Game is over, because I [would have] hit it on the green.

“But things go quickly. You process some; some you don’t. … And even if you speak with your caddie – [he’s experiencing] the same type of pressure, you can see that.

“You have a few seconds or a minute or two minutes, and you’ve got to assess where you’re going to go.”

He went forward, the decision made in those seconds and minutes having a lifetime effect. Now we use VandeVeldian as an adjective to describe an epic failure, a colossal collapse, a Shakespearian golf tragedy.

But Jean Van de Velde didn’t die that day. Unlike Romeo and Othello and Hamlet and Macbeth, he was not befallen by poison or sword or cowardice. Yes, he wept for days thereafter, but unlike King Lear, who spoke of madness, he did not succumb to grief.

A tragic figure? That depends upon your scope.

A second chance at love? That exists. The four children? Doing well, thank you. An enjoyable career? Currently working for Sky Sports and playing a handful of senior events; a former French Open chairman who aided his country’s efforts to host this year’s Ryder Cup. Philanthropy? A Madagascar missionary.

The good health, good meals, good wine. The good life. They’re all there, with or without his name on the claret jug.

“Would I like to have my name on the trophy?” he rhetorically asks. “It’s a simple yes.”

His 14 letters were all but engraved there forever. Had he made different decisions, gone a different direction, his name would be below Mark O’Meara’s and just before Tiger Woods’. Instead, that spot is Paul Lawrie’s, in perpetuity.

If people didn’t constantly bring it up, he could go “days, even weeks” without thinking about it.

“Everybody feels about it. It doesn’t leave anybody,” he says of those who have seen what he did nearly 7,000 days ago. “The emotion comes out. ‘How can you be so stupid to do something like that?’ Or, ‘Geez, that’s pretty unlucky.’ ... The emotions are at a maximum.”

He still feels the pain, you know. It weighs on his shoulders at times, just enough for him to take notice and shrug it off.

“I think there are two ways to handle it,” he says. “Stay at home and hide in a cupboard somewhere and never go out and feel sorry for yourself. Or you get up and you go out, and you fight again.”

Just as he fought back from a 2002 skiing injury that took him, by his account, two years to again walk properly. Just as he did in overcoming a soul-sapping playoff loss in his 2005 national open to win the following season in Spain – his European Tour denouement.

Jean Van de Velde is now 52. Next year will be the 20th anniversary of his Open defeat. There will be a 25th anniversary and more championships contested at Carnoustie. There will be more interviews. More strange men with their familiar questions. And he will graciously answer them. He doesn’t shy away from the moment that defined his career. But he doesn’t let it define him, as well.

Breakfast in the morning, before he starts his to-do list. Lunch with a glass of wine in the afternoon. Dinner with a few more glasses in the evening. And, as often as possible, the surroundings of friends and family.

“There’s nothing worse,” he says, “than bad company.”

This is Jean Van de Velde. 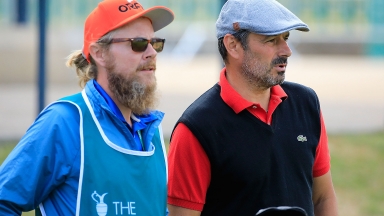 Jean Van de Velde didn't face criticism for his '99 Open collapse alone. His caddie shared the blame. The two are together again for this week's Senior Open at St. Andrews. 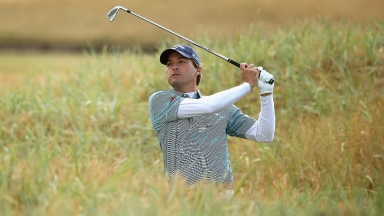 Kisner doubles 18, defends not laying up

Kevin Kisner lost his solo lead by going for the green out of deep rough and making double bogey on the 18th hole, but he defended not laying up. 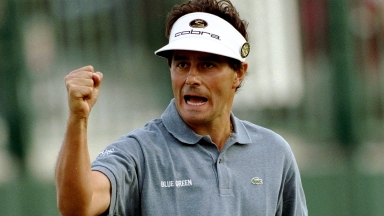 He didn't win the 1999 Open Championship at Carnoustie. And, ironically, it's because of that we'll never forget the name Jean Van de Velde.