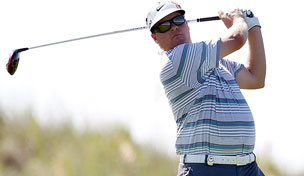 Getty Images
CHARLOTTE, NC - MAY 01: Camilo Villegas of Colombia plays from behind a tree trunk on the 5th during the third round of the Quail Hollow Championship at Quail Hollow Country Club on May 1, 2010 in Charlotte, North Carolina. (Photo by Richard Heathcote/Getty Images)  -

With the season's final major in the rear view mirror, players now focus their attention on the Playoffs. This week's Wyndham Championship represents the final event of the FedEx Cup regular season, and for many the final chance to jump into the top 125 in the standings and extend their season.

Webb Simpson returns to Greensboro as defending champion, but a strong field of contenders will look to take the title from him this week. Here are 10 players to watch:

1. Carl Pettersson: A former champion at Sedgefield (2008) who finished T-4 here last year and has already won this year on another 'target' golf course (Harbour Town). The Swede lives in nearby Raleigh, went to NC State and has unending amounts of positive goodwill stockpiled from how he dealt with the unfortunate penalty situation on Sunday at Kiawah. What's not to love?

2. Webb Simpson: The U.S. Open champion returns to the site of his first Tour victory last summer. Another player with roots in the Tar Heel state, Simpson will hope that some friendly confines will help him shake off the rust post-paternity better than wind-blown Kiawah Island did last week.

3. Jason Dufner: Quietly shot -5 over the final two rounds at Kiawah, finishing T-27 although never really factoring. Dufner continues to be one of the more consistent players in 2012, currently ranking third in the all-around, fifth in scoring average and leading the Tour with 17 consecutive cuts made.

4. Josh Teater: Returning to action after a week off, Teater has posted three consecutive top-10 finishes and may be the hottest player you haven't heard of. He's finished in the top 25 at Sedgefield each of the last two years, and he currently ranks 15th on Tour in total driving and 22nd in GIR percentage.

5. Sergio Garcia: With Ian Poulter's Sunday charge, Garcia now finds himself on the wrong side of the European Ryder Cup bubble with only two weeks to go and in need of a good result. He finished fourth here in 2009, his only prior visit to Sedgefield CC.

6. Brandt Snedeker: Though captain Davis Love III has four picks at his disposal, odds are right now that he won't be spending one on Snedeker. Thus Sneds begins his four-week, mini-Ryder Cup audition on a course where he has posted two top-10 finishes in the last three years.

7. Brendon de Jonge: Trailing only Jason Dufner for consecutive cuts made (15), de Jonge continues to be one of the most stable players of the year. Should have no problem finding the greens around Sedgefield, as he currently ranks 11th on Tour in GIR percentage.

8. David Toms: A runner-up here in 2010, Toms has had a solid summer season with four top-15 finishes in his last seven starts. Currently stands seventh on Tour in driving accuracy and has been under par in nine of 10 final rounds in 2012.

9. John Daly: Hardly a model in consistency, Daly did manage to back up his season-best T-5 finish in Reno with a very respectable T-18 at the PGA. Currently 137th in the FedEx Cup points race and having never made it to golf's version of the playoffs, Daly will need one more high finish to crack the top 125 and earn a spot in the field for The Barclays.

10. Nicolas Colsaerts: Like Sergio Garcia, Colsaerts is currently just outside the cutoff for the last automatic European Ryder Cup spot. Unlike Garcia, he doesn't have a sterling Ryder Cup history to fall back on in hopes of landing one of the two captain's picks. If the Belgian is going to make the team, it will likely have to be on merit between this week and next.