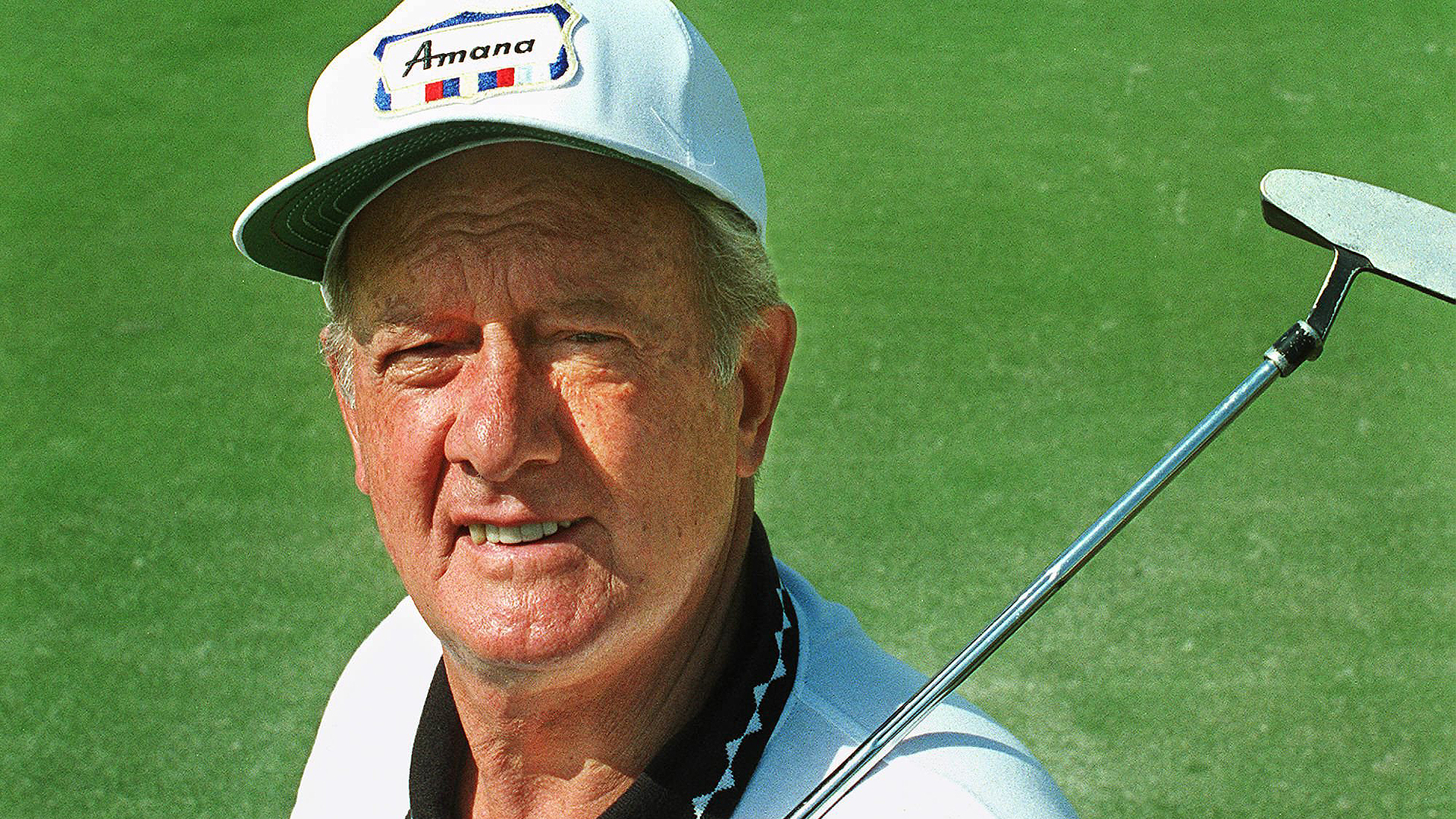 A moment of silence, please, for Lou King, who died Saturday in Iowa City at age 93. If you’re wearing a hat, do NOT take it off, especially if it bears some company’s name or logo. Lou used to get mad when professional golfers would take off their hats – at least the professional golfers he was paying to wear said hats. His company’s hats.

Every golfer who gets paid to wear some non-golf company’s name or logo on his hat – we’ll expand it to anywhere on his clothing – owes Lou King a debt of gratitude. We’re talking to you, Phil Mickelson, with your KPMG visors. And you, Bernhard Langer, with that Mercedes logo on your shirts. And you, John Daly, with – well, with seemingly everything, everywhere.

In Lou King’s long, illustrious career in golf, his employers included the Ben Hogan Company, MacGregor Golf and the PGA of America (for which he served as executive director). But it was during his tenure at the Iowa-based appliance maker Amana that he had the most lasting impact on the game. His idea was simplicity itself: Give Amana exposure in person, on television and in newspapers and magazines by paying pros to wear hats with the company’s logo.

Amana paid pros $50 per tournament – “dirt cheap,” King told me when I profiled him in The Palm Beach (Fla.) Post in 1999. And it was well targeted advertising, too, aimed at affluent people who play golf. “Those are the people who buy major appliances,” King said.

Many of golf’s powers-that-be were less than amused, however. Tournament winners were frequently directed to doff their headgear for post-round television interviews. That made King see red. “If you’re going to take your hat off,” he would complain to any of his client pros who did, “why am I paying you?”

It was practically a moot point, though, as TV directors schemed to keep the controversial caps out of the camera’s frame.

Legendary CBS golf producer Frank Chirkinian was particularly galled by King’s hat strategy. Burned into his memory was the first pro he saw wearing an Amana hat on one of his broadcasts: Larry Ziegler, in a late-1960s Masters.

When I interviewed him for my 1999 article on King, Chirkinian, who died in 2011, said he refused to show Ziegler because “I was all of a sudden quite incensed that he was wearing this identification representing Amana, and I felt that I had to do something to protect the integrity of our sponsorship.”

By 1999, however, most of those involved in network broadcasts of golf tournaments had ceased trying to stem the tide of corporate logos. “You really don’t think about it anymore,” said Jack Graham, current Golf Channel and former ABC Sports producer. “It’s become so much an accepted practice.”

Still standing guard on the wall, however, was NBC’s golf producer, Tommy Roy. “We do think about it still,” Roy said at the time. But last week, when I asked Roy the same question I had asked him in 1999, he chuckled. “No,” he said, “we haven’t worried about that in years.”

The networks’ vigilance during the 1960s sometimes bordered on the absurd. Graham told me in 1999 that former ABC Sports president Dennis Swanson insisted on wiping out hat logos on still pictures of players that were used on ABC’s golf broadcasts. “I understood what Dennis was saying,” Graham said, “but at the end of the day I said ‘Look, you see them eight gazillion times on the golf course with their logos on. I think we make them look foolish with a hat that has nothing on it.’”

There was concern in some quarters that the Amana logos would spawn competitors, with players starting to look like NASCAR drivers. Some would say that has already come to pass. A photo of Daly, who admittedly is an extreme case, taken at this year’s Constellation Senior Players Championship reveals no fewer than six sponsor logos on his golf shirt – one on each side of his collar, one on each sleeve and one on each breast.

King would not have approved. “If it gets to be bad taste to where they start to look like some of these race cars, I think it’s bad,” he told me. “I personally don’t think it’s right for a player to have three or four different logos on their golf shirt.”

Times change, though. The PGA Tour’s regulations on logos read in part: “As a guideline, no more than four different sponsor logos should appear on a player’s clothing and headwear.”

King spread the Amana hat gospel to more than just professional golfers. A former starting quarterback for the University of Iowa, he later became friends with legendary Alabama football coach Paul “Bear” Bryant. King and Bryant would occasionally play together in golf outings and charity tournaments, and King would always make sure to give Bryant a pristine white golf hat with the Amana logo.

King was also friends with former Minnesota Vikings coach Jerry Burns, and provided Amana stocking caps for the team to use when the temperatures plummeted. “For three years we had terrific logo recognition in pro football,” King said.

The question of which pro was the first to be paid to wear an Amana hat is somewhat muddled. King paid eventual winner Bob Goalby to wear an Amana hat in the 1968 Masters (that featured the infamous Roberto De Vicenzo scorecard gaffe), but Amana’s official program of paying pros didn’t begin until later that year, when King saw Julius Boros put on an Amana hat (that he had gotten when he played in the company’s yearly pro-am) in the Texas heat of the 1968 PGA Championship in San Antonio. That convinced King that a widespread program would be worth the investment, and the rest is hat history, logo lore.

So tip your hat – just don’t take it off – to Lou King, a man ahead of his time.