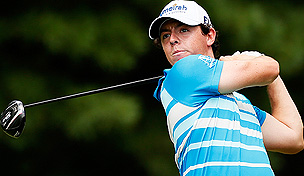 With his T-5 finish in Akron, Rory McIlroy extended his lead atop the European Ryder Cup standings heading into the season's final major. The 10 players currently set to qualify for the European Ryder Cup team did not change this week, but many players will have a coveted spot within their grasp if they can produce a high finish this week at the PGA Championship.

The top 5 after the WGC-Bridgestone Invitational (points in parentheses):

The next five players will be the highest five on the World Points List not already on the team. Currently, that handful of players would consist of the following in order of their position on the list (points in parentheses):

Olazabal will finalize his team by making two picks. Here are a few players currently on the wrong side of the bubble who will merit consideration:

Nicolas Colsaerts: The Belgian trails Garcia by less than six points for the final spot via the World Points list and will look to make up the deficit this week in South Carolina.

Ian Poulter: A strong Ryder Cup resume to his credit, Poulter will likely make a short list of captain's pick nominees but would prefer to earn his spot through more conventional means.

Rafael Cabrera-Bello: The Spaniard nearly played his way into a spot this past week in Ohio and will look to build upon that positive momentum at the PGA Championship.

Padraig Harrington: A T-19 finish in Reno was solid, but the Irishman was hoping for better. With nine names between him and the final World Points spot, Harrington will need to close strongly over the next few weeks.