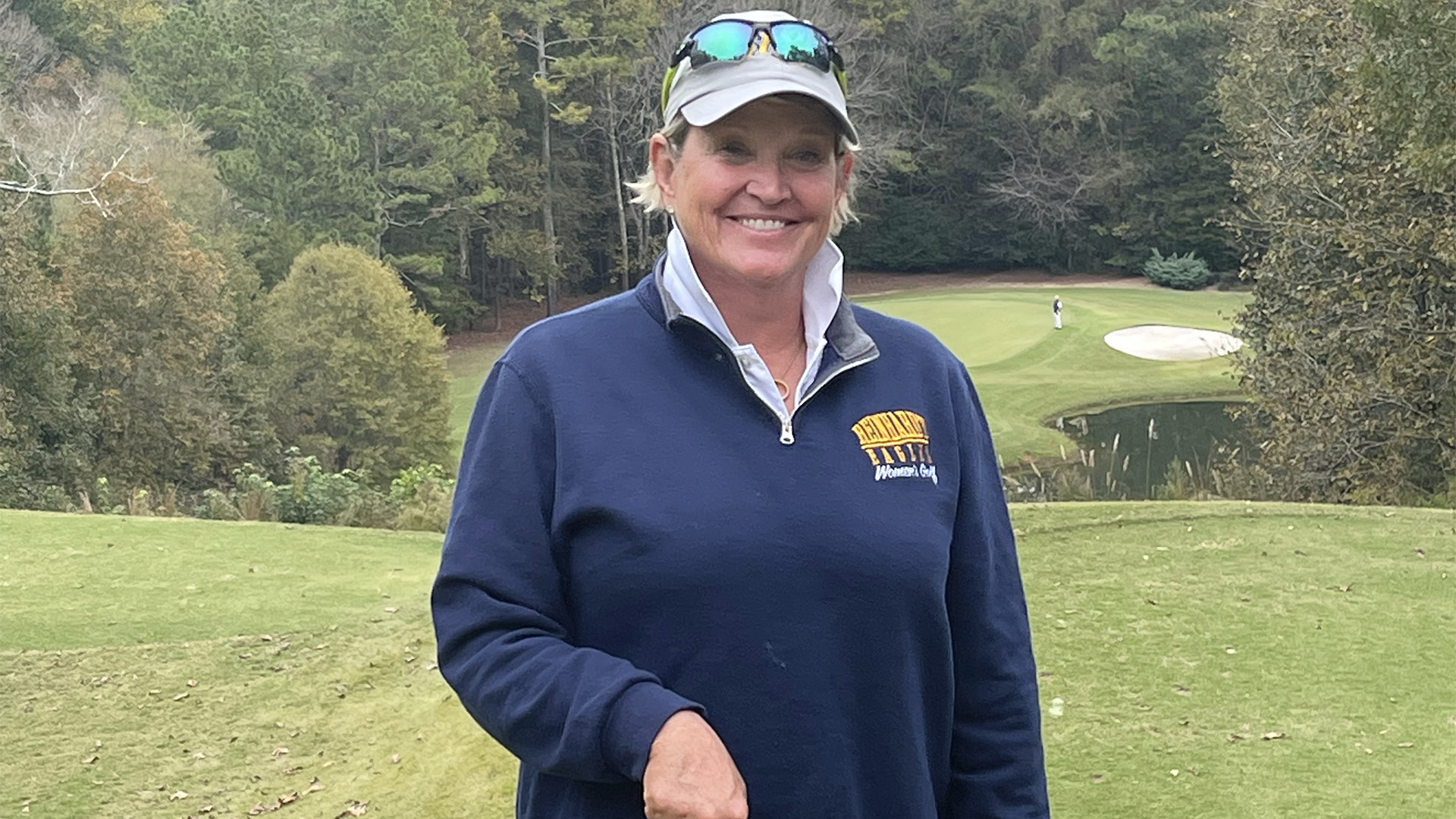 Debbie Blount opened eyes last year when she walked on to the Reinhardt University golf team as a 62-year-old, first-year player. Now, a year later, she’s proving that she isn't a “one-year wonder.”

Since last year, she’s received a partial scholarship and has improved her putting and short game. Academically, she’s maintained her 4.0 GPA and is on campus in Waleska, Georgia, for the first time as COVID-19 protocols are relaxed. But a new school year rings new success – and challenges – for the Georgia native.

In her first tournament this season, the Well at Point Invitational, Blount placed 34th, citing trouble with her putting. But her next start at the TWU Fall Invitational brought better results. The Eagles, as a team, placed second and three players made all-tournament, including Blount, who finished sixth at 18 over after shooting 78-85, notching her first college golf trophy, for which she found a spot on the shelf, and eventually worked her way to playing the Eagles' No. 1 position at the fall conference championship.

But the road there took hard work and dedication. After a few performances last season that didn't produce scores Blount, an interdisciplinary studies major, would have liked, she went to the coaches and expressed disappointment with her game. Despite being experienced with the sport, they told her there’s plenty of time for improvement.

“[My coach] said, ‘What are you talking about? You’re only a freshman, you can’t expect (low scores),’” Blount told GolfChannel.com while driving to campus for statistics tutoring. “And he knows I’ve gotten better and he says, ‘You’re still only a sophomore.’ And I guess I forget that part of it, so [I’ve] got two more years to get where [I] want to be in my [my] college golf career and that’s kind of sparked me – I’ve never thought of it that way.” 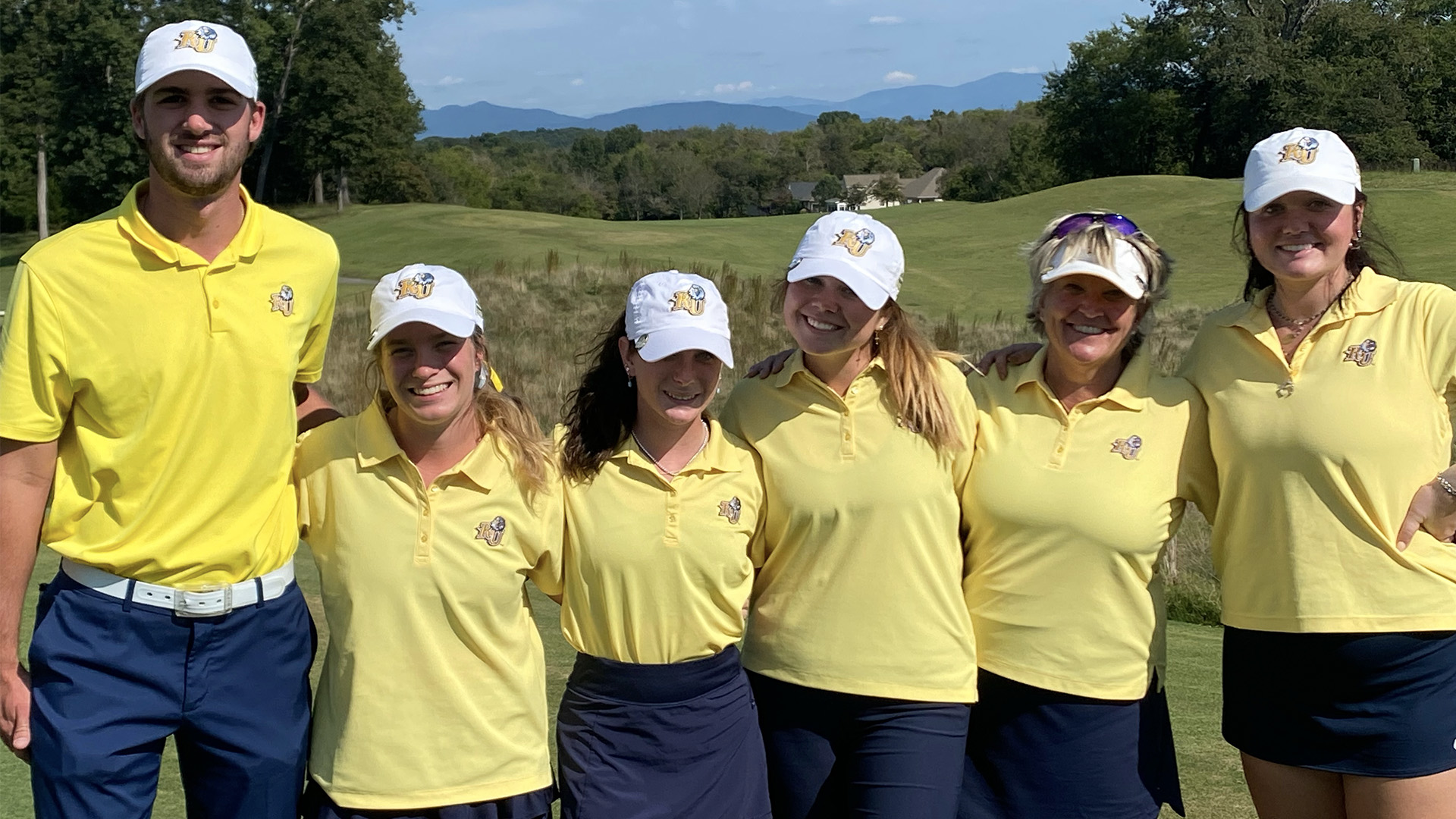 Setting goals is nothing new for Blount. Since the moment she picked up a club at 33 years old, she’s been working on her game. She once set a goal to play in a USGA championship and it took her 13 tries to make one. Originally, she aimed for the U.S. Mid-Am but then once she turned 50, she shifted her focus towards the U.S. Senior Am, finally making it in 2011 when she was 53 – and again the next year, too.

But the death of her husband, Ben, who caddied for her at the Senior Am, diminished her interest in the game and she needed a spark to reintroduce her passion for golf, which came when she decided to go to school after working as an X-ray technician and a ski instructor in Vail, Colorado, for much of her adult life.

“I lost my spark and my passion for [golf],” Blount said. “I went through the motions of things for a while and I didn’t want to give it up, but without Ben, my heart wasn’t there and I needed something to kind of refresh my passion for the game and the school’s offer [has] done that and it makes me want to work harder.”

The refreshing started when Blount contacted Reinhardt's former men's and women's golf head coach, Dan Mullins, who transitioned to assistant coach this year after eight seasons at the helm, to see if it was possible for her to try out for the team. Mullins and current head coach Evans Nichols, an assistant at the time, were impressed by Blount's tournament experience and Blount was asked to hit balls at the range with another recruit.

"My initial thoughts were that I was interested to see how she would do," said Nichols, who's 37 years younger than Blount. "I didn’t really have any expectations, but I was optimistic."

But once the coaches decided to have her on the team as a walk-on, Mullins checked with the Georgia State Golf Association president, who was familiar with Blount's game, to see if she could play the length that college teams play and Blount was deemed eligible by March 2020.

Roughly a year and a half later, Nichols said Blount has the same level of work ethic that she brought in as a freshman but has also grown in multiple areas.

"I would say that she has developed her organizational skills, which has allowed her to better prioritize her personal life with her responsibilities as a student-athlete," he said. "It’s not easy to accomplish what she has accomplished in the classroom and on the course. Second, I would say that she is starting to be more focused on beating her competitors rather than being accepted by them. Debbie is a very kind and a fun person. She loves to meet new people and make new friends. As a college golfer, it can be difficult to be friends with the people you’re trying to beat, but she has done both wonderfully."

Blount's next order of business is to refine her fitness and pick up distance with her swing. When the Eagles finish the fall season, she's "going full high gear to get fit again for the spring season.”

Blount isn't leaving Reinhardt until she gets her degree and may go on to grad school. With the team, she plans to keep playing for at least another year, as long as her body lets her, noting she's an "outlier" when it comes to typical college sophomores.

“If I graduate in 2023, I’ll be Medicare age,” she said. “Who knows how much longer my knees are going to – I got one knee replaced, so who knows if I can keep doing it. I’m taking it one year at a time. But definitely next year.”

Blount is thankful that NAIA golf, the division Reinhardt is in, has given her a chance to play competitive golf – even if that chance came 44 years after graduating from high school. However, just making the team – let alone receiving any trophies – is enough to inspire people, including one of golf's greats, to whom Blount taught skiing.

"I got a very nice note from [Jack Nicklaus] as he’s a gracious man," she said, "a note that I will treasure."