Stock Watch: Up or down for FedExCup changes?

Angela Stanford (+9%): In this era of youthful dominance, Justin Rose and now Stanford offer reminders that sometimes the long, winding journey is even more rewarding. It took Rose 20 years to reach world No. 1; for Stanford, she needed 76 major starts (and 15 years after a major playoff loss) before she finally became a Grand Slam winner, at age 40.

Sang-Moon Bae (+6%): The next time you complain about losing your game after a few weeks away, remember that the two-time Tour winner shelved his clubs for TWO YEARS to fulfill his South Korean military obligations and then regained his card. That’s a heckuva achievement.

FedExCup changes (+5%): Though the Tour Championship shouldn’t count as an official victory – come on, the playoffs leader has a TEN-SHOT head start over No. 26! – the strokes-based system is no doubt easier to follow than the various points fluctuations. RIP, Steve Sands’ whiteboard.

Tyler McCumber (+3%): Maybe he’s on his way to challenging his famous father, who won 10 times on the PGA Tour. A three-time winner this season in Canada, McCumber clinched Mackenzie Tour Player of the Year honors and will be one to watch next year on the Web.

Matthew Wolff (+2%): The reigning NCAA Freshman of the Year is now 2-for-2 this season, winning at both Pebble Beach and Olympia Fields with a 67.2 scoring average. He’s a primetime player.

Amy Olson (-1%): To win a major most need to have their heart broken at least once … but that ugly 72nd-hole double bogey could linger for longer than she probably hoped.

Lexi (-2%): As heartwarming as it was to watch Stanford snap her major-less drought, keep in mind that the best U.S. player – the 23-year-old Thompson – next April will be five years removed from her lone LPGA major title.

Web final (-3%): Twenty-five Tour cards will be on the line this week at the season-ending Web.com Tour Championship, but here’s guessing you won’t even notice – for some reason, it conflicts with the big tour’s season finale. Why couldn’t this have been played last week, when the Tour was dark and the Web could get some much-needed exposure?

Player of the Year debate (-5%): As much as the Tour might promote otherwise during its big-money conclusion, Justin Thomas said it best on Twitter: Majors trump all. It’s Brooks Koepka’s trophy this year.

Repairing damage (-6%): Golf’s governing bodies are confident that the new rules (out Jan. 1!) will speed up pace of play, but it’s hard to see how that’s possible when they now will allow players to tap down spike marks on the green. With $1 million and major titles on the line, you don’t think guys will spend an extra minute or two gardening? 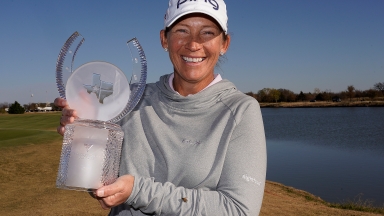 Angela Stanford won her home LPGA Tour event in front of her parents, closing with a 4-under 67 for a two-stroke victory in the Volunteers of America Classic. 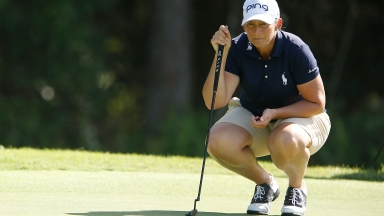 Mid-marathon training, Stanford off to good start at TOC

As Angela Stanford trains for a marathon during this year's LPGA season, she got off to a fast start at the Diamond Resorts Tournament of Champions, firing a first-round 65. 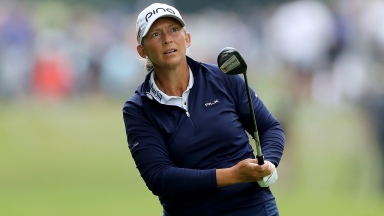 Stanford training for marathon during season

Angela Stanford is training to run a marathon for the first time during the LPGA season in hopes of strengthening her mental toughness, something she's been trying to improve.