Tango in the desert: Texas, Arizona State to meet in NCAA men’s final 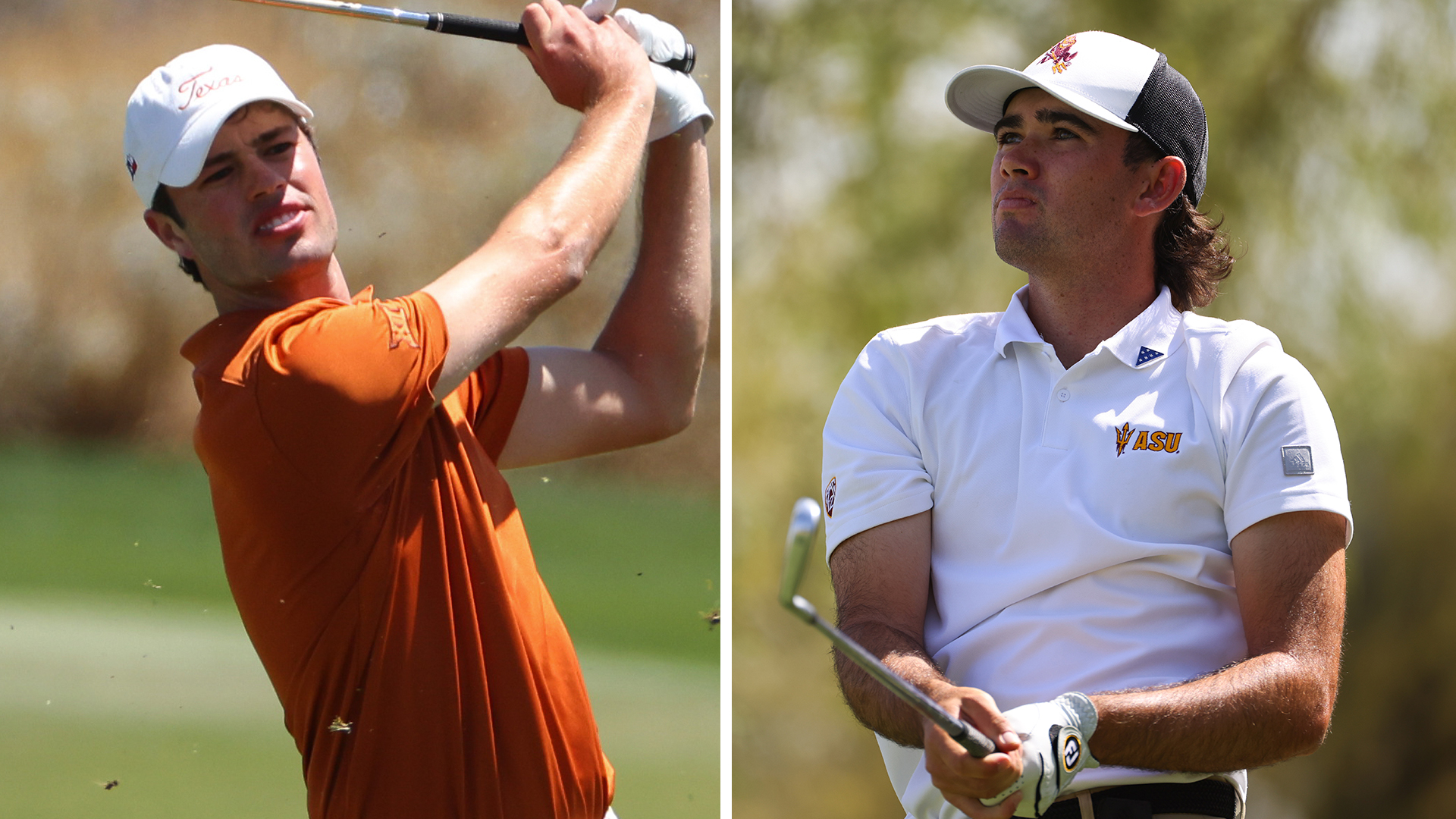 Texas’ last dance has endured until the final song.

Host Arizona State will try make sure that dancing doesn’t continue any longer than that.

The Longhorns and the Sun Devils will meet in the final match of the NCAA Championship on Wednesday at Grayhawk Golf Club in Scottsdale, Arizona. Texas, led by the vaunted senior trio of Cole Hammer, Pierceson Coody and Parker Coody, earned its spot by virtue of victories over Oklahoma State and Vanderbilt. Arizona State punched its ticket by knocking off top-ranked Oklahoma and reigning national champion Pepperdine.

“The team that we’ve put together is a team that’s been wanting to do this for several years,” Texas head coach John Fields said. “And what I’m most proud of is that they’ve persevered, and here we are.”

Since claiming national runner-up honors in 2019, the Longhorns had been on the receiving end of one body blow after another. Texas was one of the NCAA title favorites when the COVID-19 pandemic canceled the 2020 postseason, and last season the Longhorns were again trending before a jam-packed schedule and illness (Pierceson Coody was struck twice, at the Walker Cup and nationals) contributed to Texas missing the 54-hole cut at Grayhawk.

Then last December, Texas’ hopes were nearly derailed again when the Coody twins each fractured their right radial heads after crashing into a lightly padded, cement wall during a post-workout relay race.

“It just made us all a lot more appreciative about what we do,” Fields added.

The Coodys fully recovered, returning within a couple starts of each other mid-spring (Pierceson Coody won by six in Augusta in his first event back), and the Longhorns have been building momentum ever since. This week at Grayhawk, the final collegiate tournament for Hammer and the Coodys, Texas kickstarted its championship with a 3-under final round, the best of the day by seven shots, to nab the fourth seed for match play.

Hammer and Parker Coody each posted 3-and-2 wins in Wednesday’s quarterfinals opposite second-ranked Oklahoma State while junior Mason Nome, one of the Longhorns who stepped up mightily in the Coodys’ absences, hung on with back-to-back closing birdies to earn the clinching point against Jonas Baumgartner.

Texas’ semifinal opponent, the third-ranked Commodores, had lost to just one team all spring. Before his team teed off, Fields told Golf Channel that his Longhorns were hoping to be the second team to best Vanderbilt in 2022. They succeeded.

“What I’ve noticed is they’ve freed up, they’re enjoying what they’re doing here,” Fields said. “I’m particularly proud of the fact that they worked so hard to get here, but at the same time they’re enjoying it.”

Arizona State wasn't spared adversity along its road to Wednesday's title bout. In trying to become the fifth host to win the NCAA Championship – and third in the match-play era – the Sun Devils fell short in its first of three consecutive tries last May at Grayhawk, losing to Oklahoma in the semifinals. And while one of the top-8 teams in the country entering nationals – all of which qualified for match play this week, a championship first – the fourth-ranked Sun Devils appeared just last month as if they would have trouble just making it back to the knockout stage. Senior Cameron Sisk had slumped after a dazzling fall, and junior David Puig injured his back and missed multiple events, including the Pac-12 Championship and the first round of regionals.

Any concerns, however, were erased once Puig was subbed in on Day 2 in Stockton, California, and shot 8 under in 36 holes to lead Arizona State to the regional title. Puig then tied for 11th in stroke play earlier this week while Sisk notched a T-5 finish, ending up a shot out of a four-man playoff.

When Oregon won the 2016 NCAA title at Eugene Country Club, Ducks head coach Casey Martin was candid in talking about the extra pressure of playing at home. Arizona State seems to have figured out how to mitigate those unique expectations behind its calm and calculated coach, Matt Thurmond, who went back to school last summer and three weeks ago graduated from ASU's Thunderbird School of Global Management with a Masters degree in Applied Leadership and Management.

Thurmond won both of his pairings battles, and his players took it from there. Sisk shook off a pesky Stephen Campbell Jr. with a birdie on the first playoff hole to send the Sun Devils past Oklahoma, and he then beat Derek Hitchner in his team's 4-1 win over Pepperdine. Puig bounced back for his first point by toppling Pepperdine's Joey Vrzich, and freshman Preston Summerhays, fresh off a 6-and-5 drubbing of Haskins Award winner Chris Gotterup in the quarters, survived coughing up a 5-up lead against Joe Highsmith to move his record to 2-0 as well.

“I’m just happy that our guys have it inside of them to hit the big shots in the big moments, to never give up.” Arizona State head coach Matt Thurmond said. “It was a pretty exciting finish today.”

And Wednesday should bring even more fireworks, with Hammer and fifth-year senior Mason Andersen, who is also 2-0, kicking off the festivities at 1:35 p.m. local time. Parker Coody and Pierceson Coody will follow, opposite James Leow and Summerhays, respectively. Nome draws Puig, and Vick and Sisk will square off in the anchor match.

Should Arizona State end up sealing the deal, it will mark the program's third NCAA title and first since 1996.

Texas is gunning for its fourth national crown, 10 years since its last – a 2012 thriller over Alabama on the backs of Jordan Spieth and Dylan Frittelli at Riviera – and 50 years since Tom Kite and Ben Crenshaw led the Longhorns to their second of back-to-back titles.

Two teams will tango, but only one can add to its tally this year.

Will it be the hosts keeping the NCAA Championship trophy in the desert?

Or will the stars finally all align for Texas' terrific trio? 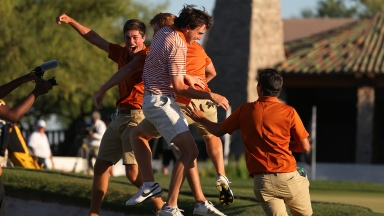 In what was the last dance for its three seniors, Texas sent them off with a national championship after beating Arizona State on Wednesday at Grayhawk. 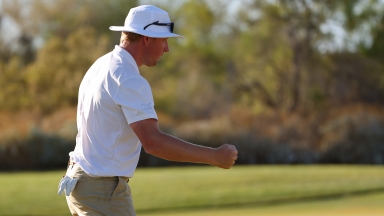 The Texas Longhorns are the 2022 NCAA Men's National Champions 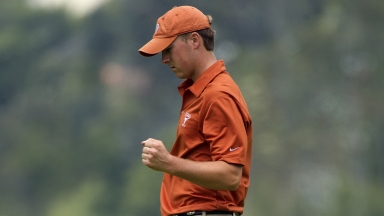 This is the story of the 2012 NCAA Division I Men’s Golf Championship at Riviera Country Club, as told by those who had front-row seats.