Tiger Woods is not here, so we look back and we look forward, because that’s what we do 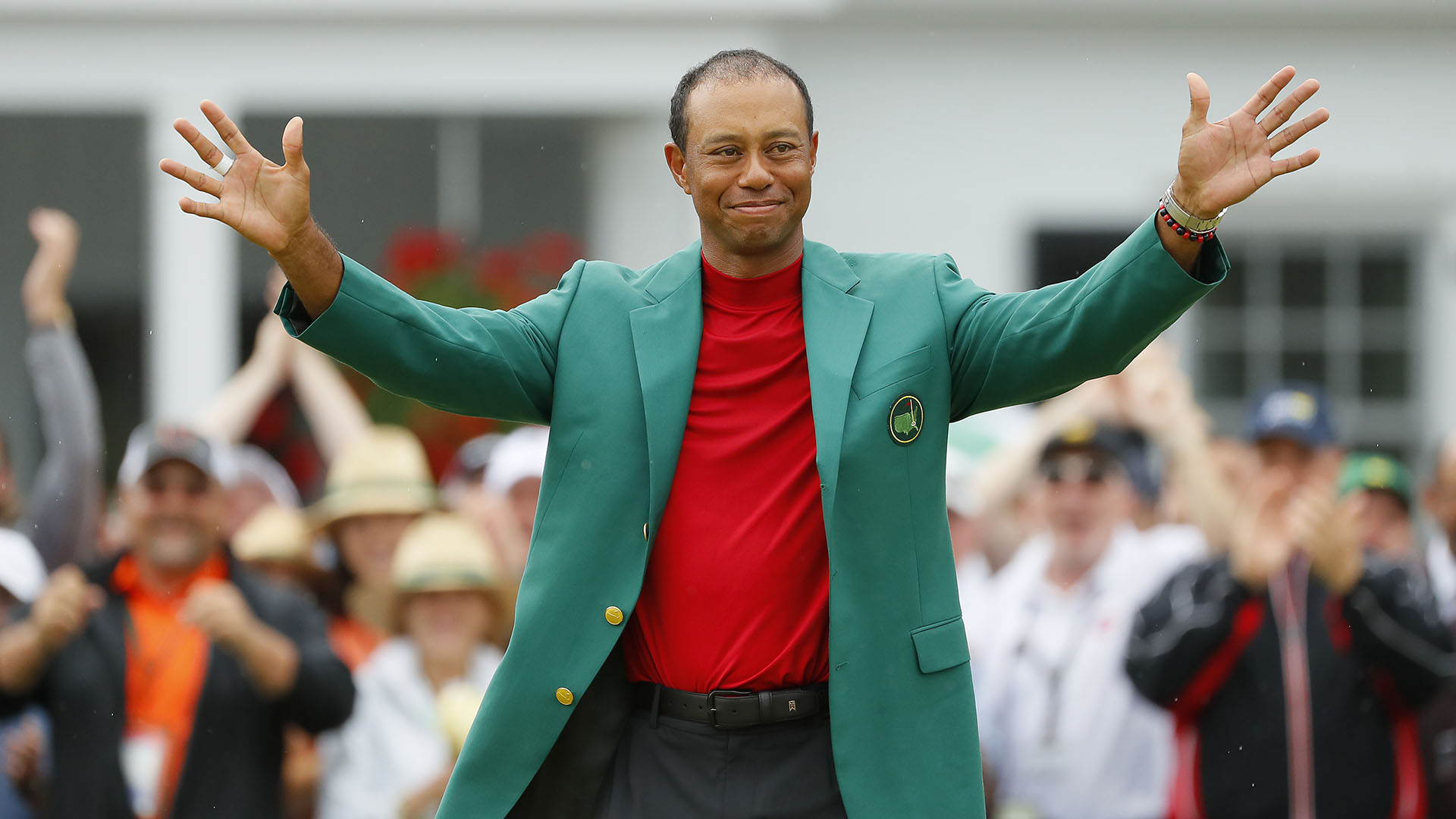 The Masters will commence on Thursday with fewer patrons at Augusta National than is customary, but more than attended last year’s version, which had been pushed by the pandemic into November and contested without spectators in one of those empty sports cathedrals that we came so quickly to recognize and, in a compromise with our souls, to grudgingly embrace. (We’re still doing this: Last Saturday night Jalen Suggs made one of the most memorable shots in college basketball history, with roughly 8,000 fans rattling around inside a giant football stadium and we: Did. Not. Care. In the least. Our needs have proven more elastic than anticipated).

The Masters will become the first of America’s tentpole, one-off sporting appointments to lurch tantalizingly close to normal (followed in four weeks by the Kentucky Derby and then by the Indianapolis 500, as the calendar becomes blessedly more familiar). This weekend, unlike last autumn, there will be azaleas, and (presumably) muted roars.

There will be no Tiger Woods. Of course. He is early in his recovery from the Feb. 23, one-car auto accident in Southern California that left him with serious injuries to his right leg and required multiple surgeries, and has imperiled his career and, more importantly, his quality of life. (More on this ahead).

So this weekend we will be reminded again of that singular strata of sports celebrity power whereby an event is defined in some significant way by a single athlete. You know, in the past: The Tour de France and pre-scandal Lance Armstrong. The Summer Olympics and Michael Phelps and Usain Bolt. In the present: The French Open and Rafael Nadal. The Kentucky Derby and white-haired, shades-wearing trainer Bob Baffert. The Summer Olympics and Simone Biles.

Each of these events is much bigger than a single name, yet grows in stature and accessibility because of that single name, reaching into otherwise ambivalent family rooms. (As a kid, I would watch the Masters with my father; he was not a Jack Nicklaus fan, but Saturdays and Sundays were spent assessing the likelihood of a Bear Charge up the leaderboard). Tiger affects the Masters as much by his absence as by his presence. (Although he has been equally absent and present for eight years, playing four times and missing four).

The tournament has been his, and mostly his, since he won it by 12 strokes as a 21-year-old in 1997, formally launching the most observed golf career in history (and among the most observed lives, in or out of sports, not always in a good way). Woods’ effect on the economics of golf have been endlessly documented; he changed the course of an entire sport’s path, from the professional level to munis across the country. Likewise, he infused its demographics with hope for kids of color. That effect is impressive on the page, but stunning in three-dimensional real life.

I’ve covered only one Masters, Patrick Reed’s win in 2018. On Tuesday morning of that week, in search of the Tiger Experience, I walked a practice round with Woods, Phil Mickelson, Fred Couples and Thomas Pieters. (Thomas Pieters!). The group was followed for 18 (technically, but not practically) meaningless holes by a massive gallery, three- and four-deep everywhere. This was barely a year after Woods finally addressed his back problems with lumbar spinal fusion, and he was getting better, but not yet ready to win. That would come a year later. But there was an ease to his movement and to his smile, even as he grinded along to a 32nd-place finish.

After that practice round, Couples said, “When you play with Tiger, and you play in the tournament, the energy is unreal.’’ There was a sense in the air that Tiger was capital-b Back. (Sure, pun intended, Why not?). The discourse was a mix of hosannas to Tiger’s career and his influence – “I’ve had a respect and appreciation for [Woods] and what he’s done for the game, and I’ve benefited more than anyone else,’’ said Mickelson, and he has never wavered from that position over the years – and a real-time respect for his reconstructed game. “The sound of his ball is unreal,’’ said Couples. And so on. It was all prelude to what came a year later, a stunning, gripping victory that had seemed so unlikely so recently before.

But here is the thing about consuming sports: It should center on the moment in front of us, but it’s often more about what transpired before and after that moment. (Back to Jaylen Suggs: The net had barely stopped quivering after his half-court bomb before the world began debating its place among other buzzer-beating NCAA finishes). Likewise, our modern sports culture is addicted to projection – We take promise and extrapolate it into unmade history.

And to be clear: Wildly fulfilled. He is high among the best players in history (Nicklaus, Hogan, Jones) and when those aforementioned fiscal and cultural influences are factored in, it’s really not close. But all that is complicated, too. Because we have never stopped wanting more from Woods. In the afterglow of every transcendent moment, we looked ahead to the next one, because his career has often been measured by what he accumulated, rather than by what he did.

For so many years after ’97, there was an assumption that he would blow past Nicklaus’s career record of 18 majors; then there was an assumption that he most assuredly would not. But as soon as he won the Masters in ’19, at age 43 (second in age only to Nicklaus’s ’86 win at 45), that topic was immediately put back in play, when the more responsible angle might have been that his back – or some other age-related malady – was likely to make us consider that last Masters a miracle of sorts, and certainly a coda. And it may yet.

Woods is not alone in this regard. Once greatness is established, it becomes addictive to the masses. And sports careers are short (though longer nowadays, like Tom Brady’s, although he is an outlier), which gives their audience just a slice of a generation to consume, to absorb, to want. “The Last Dance” made us realize how much we miss Michael Jordan. Not the same type of adoration, but Lebron James will be gone soon, too. And Roger Federer and Nadal. Phelps and Bolt, gone already, Bolt more than a decade younger than Woods, Phelps just less.

But with golfers, it’s a little different. Woods won that Masters at 43, and, Brady excepted, that’s long past the expiration date for most athletes. So while it may have been unrealistic to expect a whole new rash of major titles for Woods at that point, with a fused spine, it wasn’t crazy. The window was open. It was less open in February, when his SUV tumbled off that serpentine downhill in Rancho Palos Verdes, and now it’s hardly open at all. And that underscores the most vexing part of Woods’s legacy: Despite the 82 Tour victories, despite the 15 majors, despite the moments, there’s a genuine What If?

The first whiff of vulnerability was a dodgy knee. It happens. The second was the infidelity scandal of late 2009, in which Woods’ children, ex-wife, and Woods himself were the principal victims. And it’s not important to ask how this affected his career, but it’s intriguing. He didn’t win a major from the scandal until two years ago at Augusta, but of course it wasn’t just the scandal. His body was crumbling at the same time. It’s as reasonable to surmise that Woods was destined to give the world those 12 incredible years from ’97 to ’08 and little more, as it is to wonder how much more he could have given.

But the narrative is already playing out again. Woods is 45 years old, with the body of a much older man and psyche that’s been subjected to 10 lifetimes of public scrutiny, some of it unfathomably embarrassing. It’s been repeated on an endless loop that he was fortunate to survive the February accident. The golf discussion should probably be shelved, but even as he lay in the hospital, his odds of playing – and winning – again were debated. Possibility is never shelved with Woods.

The Masters will produce drama without Woods, as it always does. But you will hear his name this weekend, and he will be missed. He will be in Augusta, even without being present. Somewhere, his body is healing. Perhaps enough to compete again. We will keep expecting one more win, until he tells us it’s not coming.

Tim Layden is writer-at-large for NBC Sports. He was previously a senior writer at Sports Illustrated for 25 years. 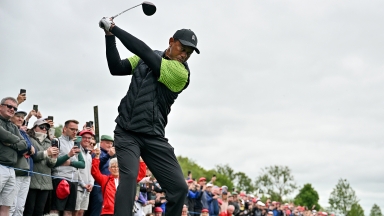 'Don’t look at our scorecard': Tiger opens in 77

Tiger Woods was back in action Monday in Ireland. It wasn't his best performance, but it was, after all, merely a pro-am. 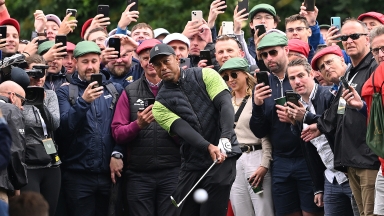 Watch: Tiger chips in for eagle in pro-am return

There weren't many highlights in Tiger Woods' return to competition after a nearly two-month layoff. But ...