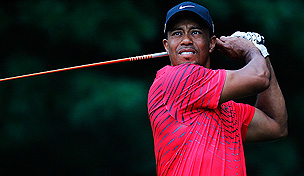 Getty Images
SCOTTSDALE, AZ - FEBRUARY 27: Scott Piercy plays his second shot on the second hole during the third round of the Waste Management Phoenix Open at TPC Scottsdale on February 27, 2010 in Scottsdale, Arizona. (Photo by Chris McGrath/Getty Images)  -

KIAWAH ISLAND, S.C. – Another third round in a major, another major disappointment for Tiger Woods.

During an uneven third round that resumed on the eighth hole, Woods made an early bogey, rattled off three birdies in a six-hole span on the back nine, then dropped a shot on the 17th when his ball came to rest on a rake mark in a sandy area. He finished with a 2-over 74 that put him five shots back entering the final round.

“I’m right there,” said Woods, who will begin his final round at 1:23 p.m. EDT with Peter Hanson and Vijay Singh. “I was at one point six back, and we had a lot of holes to play, so I was very encouraged the way I dug down deep and got this thing turned around and gave myself a chance going into this afternoon.”

Woods, of course, has never won a major when trailing after 54 holes. And if he’s going to stage a comeback on the Ocean Course, he’ll have to overtake a few world-class players – including the world No. 3.

In a warm morning sun and light breeze, Rory McIlroy polished off a 67 to lead by three at 7-under 209, with Carl Pettersson, Bo Van Pelt, Trevor Immelman and Adam Scott all within four shots of the lead.

Improbably, Woods, No. 2 in the Official World Golf Ranking, has yet to break par in a weekend round at a major this year, with a third-round scoring average of 72.75.

His performance here at Kiawah Island has been eerily reminiscent of this year’s U.S. Open, where he held a share of the 36-hole lead, bogeyed four of the first eight holes in the third round, and then proceeded to shoot 148 on the weekend to tumble down the leaderboard.

At the British Open he never abandoned his conservative game plan, even as the leaders pulled further ahead. Eventually, Woods was undone by a triple bogey in the final round, and he finished in a tie for third, his best result in a major since the 2009 PGA.

Woods held a share of the 36-hole lead here on the Ocean Course, along with Carl Pettersson and Vijay Singh. On the front nine – the easier of the two sides – Woods bogeyed Nos. 4, 5, 7 and then, on Sunday morning, No. 8 as well.

Though he picked up birdies on Nos. 11 and 12, Woods had a scare on the 15th hole – and not just because his drive sailed well right of the fairway. After hitting his approach on the green, Woods walked back toward the fairway and began hobbling. It turns out it was not an injury but rather a few Carolina cactus burrs stuck in his right leg. He went on to par the hole.

“After getting off to a horrific start there, to battle back like I did this morning, on Sunday, I gave myself a chance,” said Woods, who is at 2-under 214. “That’s all I wanted to do, to at least have a shot going into the final round.”

In the first two rounds, Woods required only 46 putts, including 23 one-putt greens. But playing in the final pairing during the third round, he hit three greens and took 15 swipes on his opening nine (30 in all). His 74 was the second-worst score from a player currently in the top 32.

In his past 19 weekend rounds at a major, Woods has shot in the 60s only three times.

He’ll likely need a sub-70 score Sunday afternoon to even give himself a chance. 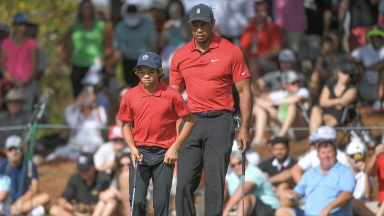 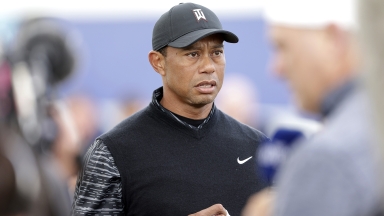