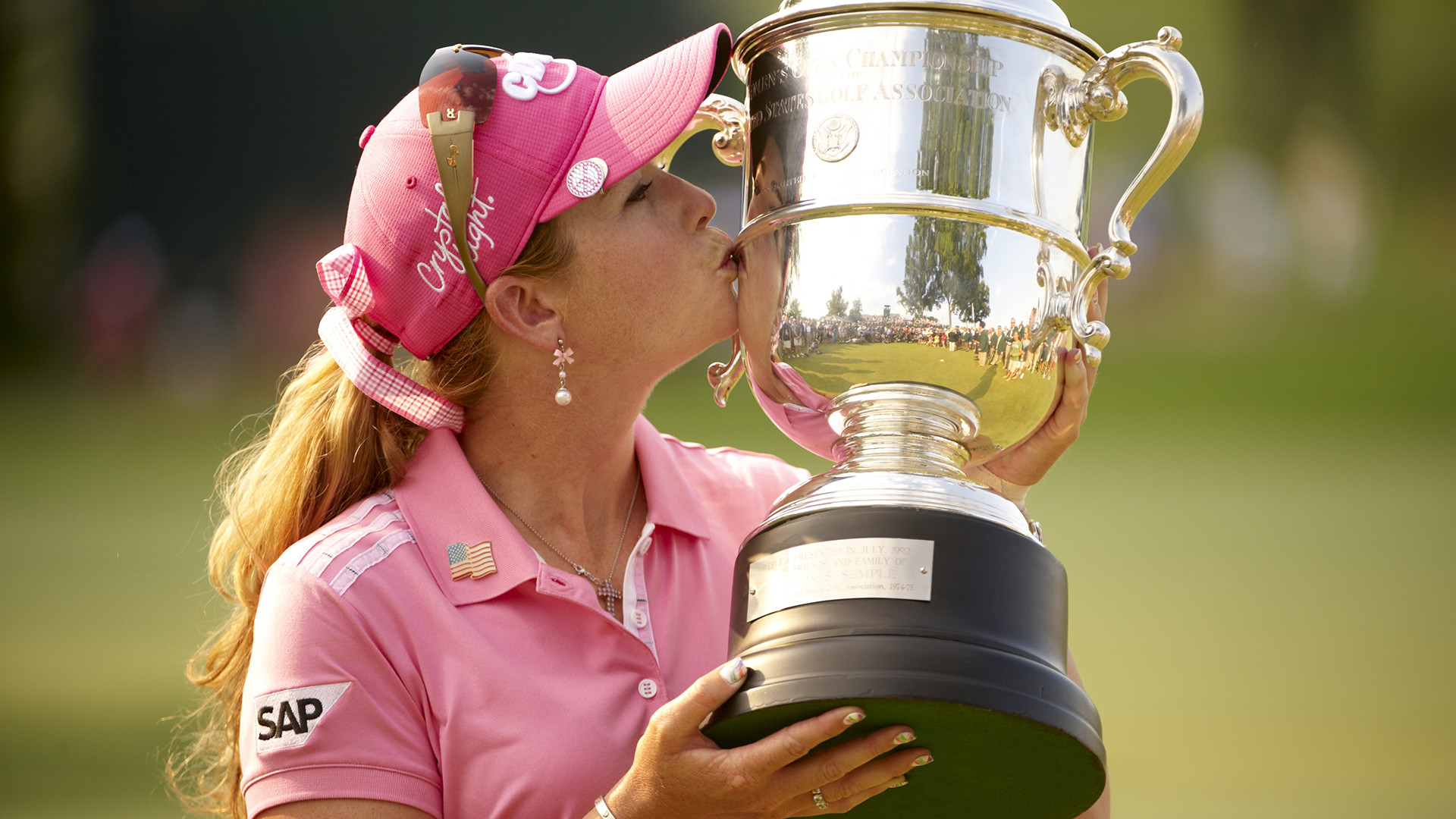 For players, they can feel like a shift in their universe, maybe to a different view, or possibly a different understanding of who they are, or maybe just how the world views who they are.

For Stacy Lewis, her most memorable turning point came when she was still an amateur.

For Cristie Kerr and Paula Creamer, they came as professionals.

Here’s the newest edition of our Turning Point Series: 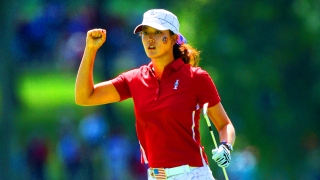 Lewis redshirted her freshman year at the University of Arkansas to recover from major spinal surgery to repair the damage scoliosis was doing to her. Nobody knew what her future held after a surgeon deflated her lungs and moved her organs around to fix a steel rod to her back.

Nobody could have predicted the success that would follow.

As a junior, Lewis became an NCAA champion, a feat she will always remember as the turning point in her playing career. It would open a floodgate of confidence and momentum that would ultimately lead to two professional major championship titles, two Rolex Player of the Year awards, two Vare trophies and also to the Rolex world No. 1 ranking.

Ask Lewis, 35, to boil down her turning point to a single shot, and she will take you back to the final hole of the NCAA Championship on the Legends Course at LPGA International in Daytona Beach, Florida. She will take you to the up-and-down that secured her NCAA individual championship in 2007.

Six shots down starting the final round of the ’07 NCAA Championship, Lewis rallied on the back nine, making five consecutive birdies after making the turn. Those were life altering, but she will never forget the importance of her par save at the last. It came after she missed the green left and found herself in trouble, near the bottom of a swale, with a difficult downhill lie, requiring a pitch up to a hole she couldn’t even see. Her savvy play and putt got her into the clubhouse with the two-shot lead she wanted to protect, with challengers still on the course.

In her words: “It was deader than dead over there where I missed. I couldn’t even see the putting surface, just the flagstick. It wasn’t a chip you could get very close to the hole. I was just trying to give myself a putt. I played it like a bunker shot, and I got it up there and made the 15-footer.

“Winning the NCAA Championship changed everything for me. It changed what I thought I could do, and it opened a lot of doors for me. It’s what created the belief in me. I went crazy playing well that summer. When I think of my turning point, that’s what I think about.” 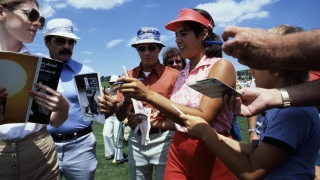 Our “Turning Points” series turns to Nancy Lopez, Lorena Ochoa and Meg Mallon and their careers that weren’t just distinguished by the championships they won, but through their generosity.

After turning pro at 18, Kerr worked six years to break through as an LPGA winner. She remembers a lot of turning points amid her rise to stardom, on her way to 20 LPGA titles and her reign at Rolex world No. 1, but she most remembers her breakthrough on the grandest stage in women’s golf. Kerr, now 42, remembers the shot that helped her win the U.S. Women’s Open in 2007, the first of her two major championships.

Kerr stepped to the 14th tee tied for the final-round lead with world No. 1 Lorena Ochoa at Pine Needles in Southern Pines, North Carolina. After finding the fairway, Kerr was left with 186 yards to the hole. She carved a life-changing 4-iron to 15 feet. With Ochoa scrambling to save par after coming up short with her approach shot, Kerr holed her birdie putt to take the lead. She wouldn’t surrender it coming home.

In her words: “I loved my 4-iron, until hybrids made it obsolete. I remember backing off that shot three times, not because I was nervous, but because of a bug. Yeah, I remember every shot of that round. I remember threading the two bunkers at the front of the 14th green. Making that shot and putt were important, because I hadn’t been playing well, but I stuck with it. I beat the world No. 1, playing in the same group. It gave me the confidence that I could win the big tournaments under big pressure.” 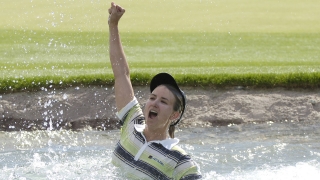 Karrie Webb, Beth Daniel and Pat Bradley were dominant figures in their time on the course. Take a look back at some hinges that opened doors for them in this edition of "Turning Points."

After winning the LPGA Qualifying Tournament by five shots as a teen phenom, Creamer didn’t take long to assert herself on tour. She won the Sybase Classic in her ninth start as an LPGA member in 2005. She was just 18 years, 9 months and 17 days old. Creamer won eight LPGA titles in her first four years on tour. Her four victories in ’08 alone set her up as the best LPGA player without a major, even though she was only 22. The questions about when she was going to break through wouldn’t stop, even after a mysterious stomach malady plagued her through a winless year in ‘09.

Things got worse for Creamer in 2010, when a thumb injury finally required surgery. She arrived for the U.S. Women’s Open at Oakmont to make just her fourth start following the surgery. She was coming off a missed cut with questions lingering about her physical state.

That set the stage for what Creamer remembers as the most memorable turning point of her career.

Creamer’s turning point shows how history can turn on such small hinges, how confidence can grow from seeds sewn in unexpected moments.

Early in the second round, Creamer knocked her approach shot over the third green, one of the toughest to hit at Oakmont. She left herself in a precarious spot, chipping from above the hole, a place you never want to be around that course’s famously fast surfaces. It was a difficult chip shot to keep from running off the green, a shot that could easily turn into one of the many double and triple bogeys that were made on that hole all week.

Creamer, though, delicately chipped to 4 inches. She did so moments before the horn blew ending play for the day with the approach of bad weather. She got up the next morning, tapped in for par and went on to shoot 70, equaling the low score of the second round to seize lead. She built on that the rest of the way, finishing as the lone player under par for the week, to claim her lone major championship. She did so on one of world’s toughest and most revered tests, despite lingering thumb pain.

In her words: “I had practiced chipping from everywhere there, since I knew it was the hardest green to hit. I practiced hitting that chip six different ways, so I knew what options I would have, if I hit it there. I was told Tiger had that same chip a few years earlier [at the men’s U.S. Open], and he chipped it off the front of the green. That shows how tough a shot that was. I was able to make my stress-free par that next morning, and it was a huge boost to my confidence.”

Confidence that showed her she was more than ready for Oakmont’s brutish test. In fact, she was so ready, she won by four shots.