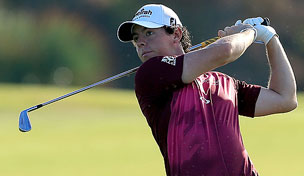 KIAWAH ISLAND, S.C. – Being in one of the final groups Saturday apparently helped Rory McIlroy locate an otherwise lost ball.

After birdieing the first two holes, McIlroy’s tee shot on the drivable, par-4 third hole on Kiawah Island’s Ocean Course landed in a tree branch some 8 feet off the ground and in the middle of the fairway. McIlroy, his caddie and officials all searched for the ball, looking high and low, in tall grass and the surrounding area, but nothing turned up.

The CBS telecast showed a bird’s-eye view of his tee shot, and was able to determine that the ball had indeed come to rest in a hole in the branch. After being informed of this, McIlroy looked in the tree and saw the ball.

From there, McIlroy took an unplayable lie but was able to save par after a tidy pitch shot. As he walked off the green, he grinned and disposed of the uncooperative ball.

'I'm like 'how can it be stuck in this thing?' ' McIlroy said after play was halted for the day. 'There's no branches, no leave for it to be stuck in. But it had wedged itself in between the tree bark and the actual tree, so I was just happy to get it up and down for four and move on to the next.'

Seriously, what else can happen to this kid?

At the British Open, he plunked a teenager with a tee shot, and his ball caromed out of bounds. Here at Kiawah Island, he hit a woman in the hip with a shot in the first round, but was able to get up-and-down and save par.

The good news: At 6 under par through nine holes, he had a share of the PGA Championship lead midway through the third round.

Check out the video here: