Why the U.S. can thank Couples and Woods for the Schauffele-Cantlay pairing 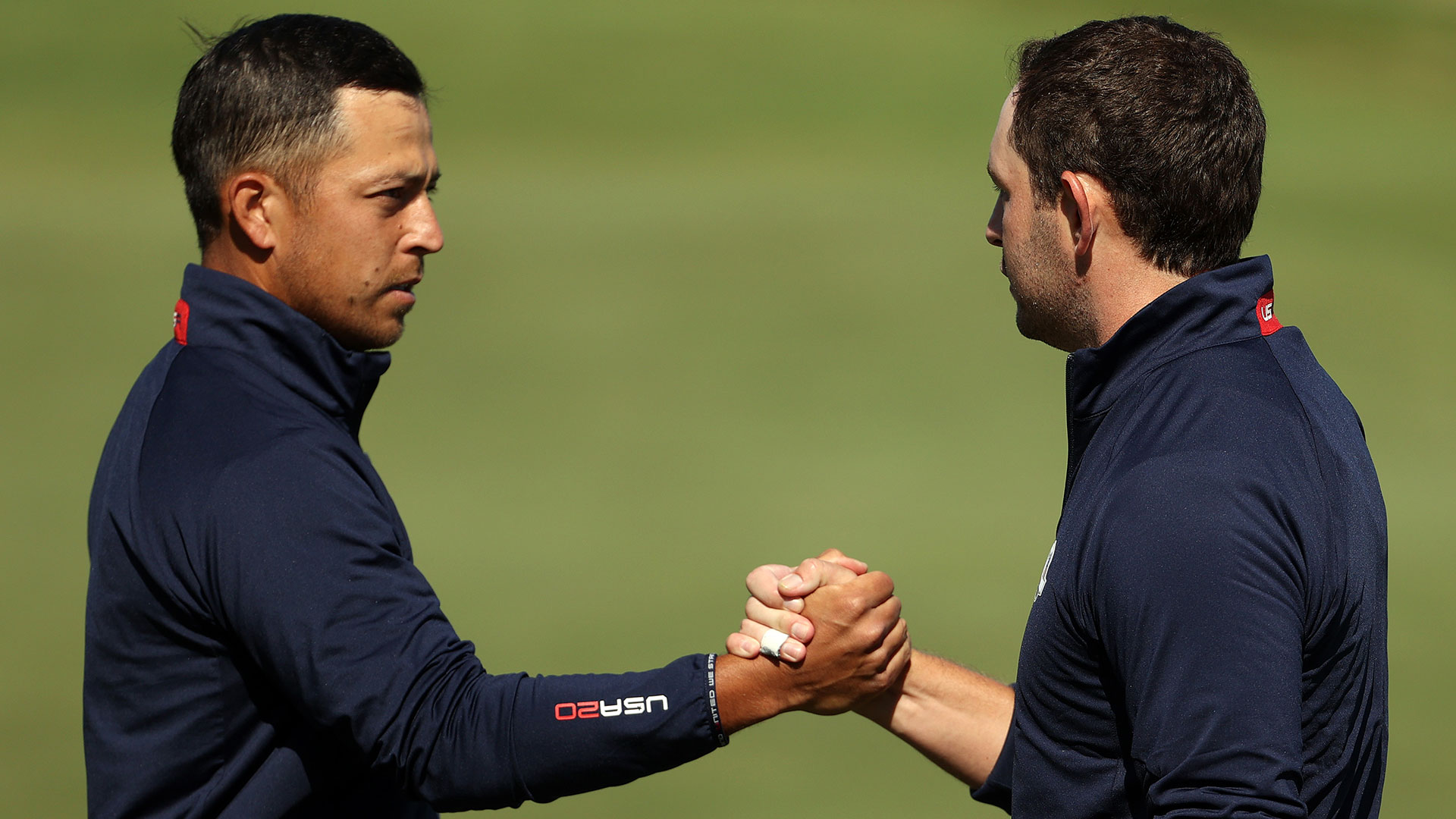 SHEBOYGAN, Wis. – It’s the kind of friendship that doesn’t require a lot of talking.

Patrick Cantlay and Xander Schauffele tend to lean into the awkward silences, as evidenced by their Saturday foursomes match at Whistling Straits. Instead, they normally just rely on a “look” to convey emotions or information. Like at the par-4 eighth hole early on Day 2 at the Ryder Cup when the Americans found themselves tied with the European duo of Lee Westwood and Matthew Fitzpatrick in the final frame.

Schauffele’s tee shot found one of Whistling Straits’ 1,000-odd bunkers and Cantlay was only able to advance the group’s second shot 100 yards into another awful lie. But Schauffele’s third rolled to 8 feet and Cantlay charged in the par save to match the Europeans.

“We turned a bad situation on 8 into a good one. Just a look there,” Schauffele said. “Any time Pat makes a long putt or hits a really good drive or chips it close, we just give each other a look.”

For decades the U.S. Ryder Cup team has searched for the kind of foursome talent that can deliver when the American side needs it the most. Enter Schauffele and Cantlay.

An admittedly small sample size, but in two turns at the foursomes wheel the duo is 4-0, dating back to the 2019 Presidents Cup. This week’s perfect run through the demanding and often disconcerting alternate-shot format is proof there is alternate-shot life for the Americans.

It’s difficult to find an apples-to-apples comparison, but the last time an American team went 4-0 in foursomes play to start their career together was Arnold Palmer and Gardner Dickinson at the 1967 and ’71 Ryder Cup (long before the Presidents Cup was played).

Schauffele and Cantlay still have plenty of work to do before they can be dubbed the “American Armada,” but the chemistry is undeniable and U.S. captain Steve Stricker - and any future American captains who care to notice - have Tiger Woods to thank for the gift that is Schauffele-Cantlay.

There is a narrative that the Californians became friends at the ’19 Presidents Cup, but the truth is they were friends well before their week at Royal Melbourne. They did, however, bond on the way to Australia over countless hands of gin.

“We didn't talk a whole lot while we were playing gin. We spent a lot of time together during that, but we were pretty much drinking coffee just to stay awake and playing because we both didn't want to lose. It was more of a competitive thing just like us playing,” Schauffele said.

But that friendship didn’t initially sell then-captain Woods on the pairing. Like most modern captains, Tiger took a slightly more scientific approach for his lineup.

As Schauffele and Cantlay silently marched off the eighth green this Saturday, they brushed past Vice Captain Couples, the group’s competitive Sherpa because he shares the duo’s SoCal sensibilities and because … well, Freddie.

If Cantlay-Schauffele continue to evolve, Woods will be remembered as the architect, but the origin story should note that he needed a “nudge.”

“I think I nudged him. It doesn’t take Tiger much nudging. He’s not a waffler. He says, ‘you’re going’ and then you roll,” Couples said. “I know Patrick really well and I told [Woods] you’re going to be shocked how good this kid is.”

Having spent a good amount of time around Cantlay at Virginia Country Club in Los Angeles, Couples was an early convert and when he saw how he and Schauffele had bonded it wasn’t a stretch to put them together.

“Tiger loved the pairing,” Couples said. “I don’t think I had to say a whole lot. Tiger had already figured out they were like Mutt and Jeff. They can finish each other’s sentences. I think they will play together forever.”

What makes a good foursomes pairing has been a long-standing mystery for U.S. captains. Couples and Davis Love III were also long-time friends with similar games, but they played just a single foursomes session together in the Ryder Cup.

For all the blame heaped on Tom Watson at the 2014 Ryder Cup, it was his team’s anemic foursomes play that earned just a single point on the way to a 16 1/2 –11 ½ loss. In ’18 in Paris, it was a similar outcome with the Europeans sweeping the U.S. team (4-0-0) in the Friday foursome session. 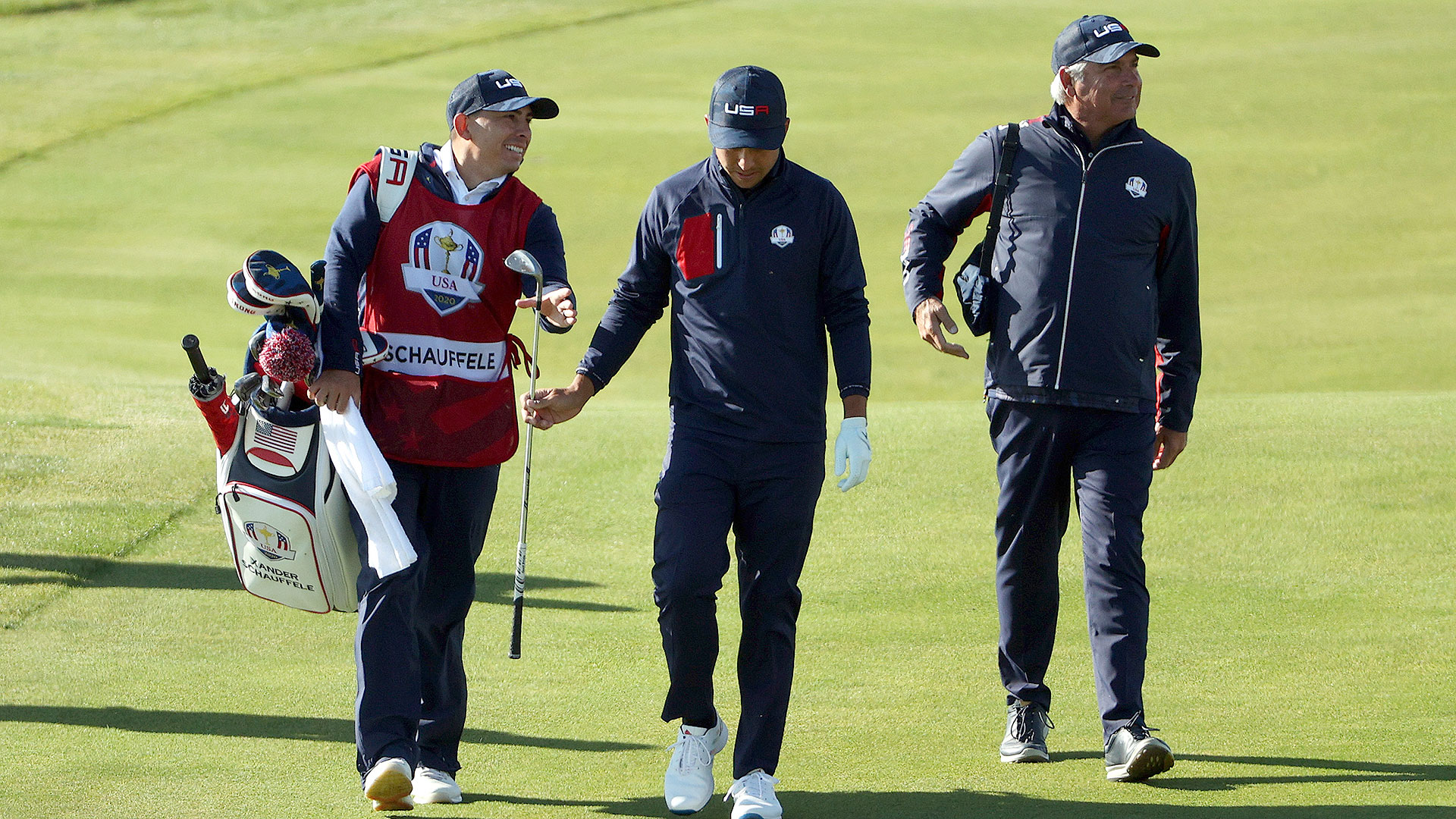 Many argued that the magical foursomes formula had nothing to do with pairings and everything to do with a strange format that Americans simply don’t play, but Schauffele-Cantlay seems to suggest that’s not entirely the case.

On Day 1 at Whistling Straits, Stricker put the two in the morning’s anchor position against Rory McIlroy and Ian Poulter, a title bout that, at least at the time, felt heavy and significant. The Americans built a 5-up lead through five holes and never looked back on the way to a commanding 5-and-3 victory.

Saturday’s match against Lee Westwood and Matthew Fitzpatrick was a bit more hard-fought, but the outcome was similar, a 2-and-1 triumph to stake the U.S. team to a 9-3 advantage.

The way Couples recalled it was a no-brainer putting the two together. Beyond the obvious friendship, they played similar games with few weaknesses.

“In alternate shot they basically hit it exactly the same,” Couples said. “Patrick might be a little longer, but their wedge game and putting is unreal.”

Couples shrugged when asked about the pairing, like putting the two together was the most obvious thing in the world and yet a generation of Ryder Cup captains would have traded their seats on the task force for an American foursomes unicorn. Freddie just smiled when pressed for more. Like the team he helped put together, the reasoning behind the union doesn’t require a lot of talking. Just a look.